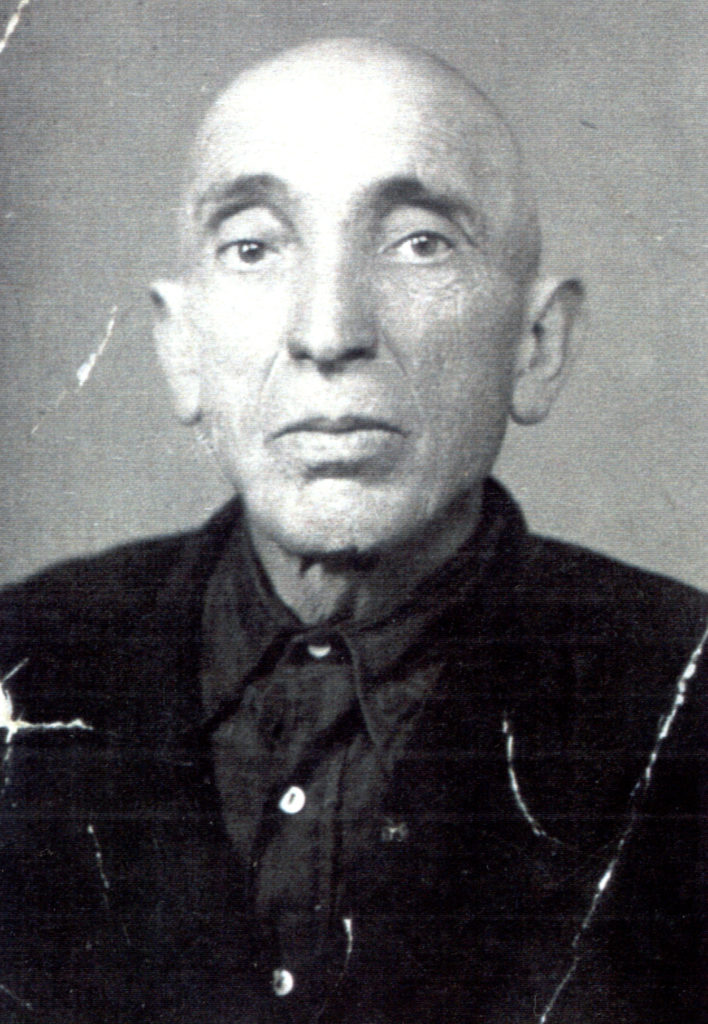 This is a picture of my father. The photo was taken in Chernovtsy in 1948. My father’s name was E’Kusiel Pisarenko. They called him Kusha in the family. He was born in the village of Rechitsa, Gomel region, Belarus, in 1898. My parents got married in 1917. They had a Jewish wedding with a chuppah. Their parents insisted on having a religious ceremony. In 1917 this was still a tradition. I don’t think my parents could have imagined at that time that it could ever be different. That only happened later when religious traditions were persecuted [during the struggle against religion]. My father joined a Red revolutionary unit during the Civil War almost immediately after he got married. He returned in 1919. My older sister, Broha, was born on 31st December 1921. She got her name after our grandmother. Misha was born at the beginning of 1924, Lisa in 1926, Abram in 1928 and I in 1937. My younger sister, Zhenia, followed in 1939. My father got a job as a plumber, and later, as a locksmith at the Gomel Plant of Agricultural Equipment. There were four children in the family at that time, but they didn’t have a place to live. There were other families without homes, too. They got together, contributed the money that they had, the plant added some, too, and they built a spacious house for four families. Our family got one of the four apartments in this house. My mother was a housewife. She got a cow and chickens and worked in her small vegetable garden. This vegetable garden and the cow rescued our family from starving to death in 1932-33 [during the famine in Ukraine]. Mama took her younger sister, Haya, to live with us during those terrible years. We survived, but Grandfather Moishe starved to death in 1933. He gave everything he earned in those years to his grandchildren. At the beginning of the war my father was summoned to the front. He was wounded in 1942. He fell ill with tuberculosis in hospital. He had only half of his lung left afterwards and was released from the army. He became an invalid. My father was a tinsmith and got a job to provide for the family after the war. Later he was severely ill with tuberculosis. We often starved. My father couldn’t go to work due to his illness, and my mother had to stay at home to look after him. My father received an invalid pension, but it was a very insignificant amount of money. My father wanted me to go to a trade school to learn some profession after I finished seven years at school. He was very ill, and he wanted to be sure that there would be someone to support the family once he would ‘leave’ us. But I was eager to study. I knew that I had to work and support my family, but I couldn’t imagine leaving school before finishing it. When I was in the 7th grade I began to give private classes. My first student was from the 5th grade. His parents didn’t pay me but they gave me food. My second student paid me 3 rubles per lesson. It wasn’t just the money that attracted me but also the possibility to be a teacher. My father told me that I had been named in honor of one of his relatives, who was a teacher at cheder, and joked that I probably also borrowed his vocation. My parents gave me the opportunity to finish secondary school. My father died in 1957.