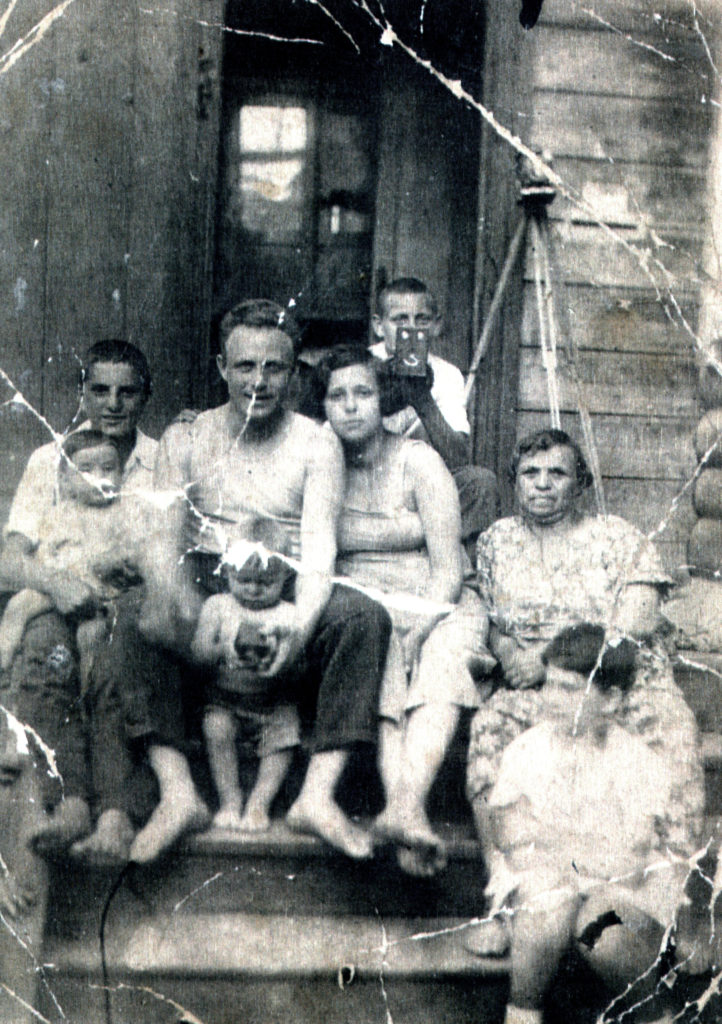 Efim Pisarenko, his brother Misha Pisarenko and their neighbors

This is a picture of my brother Misha, our neighbors and me on the porch of our house in Gomel. The photo was taken in 1938. My parents got married in 1917. They had a Jewish wedding with a chuppah. My older sister, Broha, was born in 1921. She got her name after our grandmother. Misha was born at the beginning of 1924, Lisa in 1926, Abram in 1928 and I in 1937. My younger sister, Zhenia, followed in 1939. We talked Yiddish in the family. We also knew Russian, of course, but we preferred to communicate in Yiddish. We observed Jewish traditions, observed Sabbath and celebrated Jewish holidays. I remember my mother lighting candles on Sabbath. I liked it a lot. I also recall fancy dishes we had on some high holiday – it must have been Pesach – and a lot of delicious food. I can’t remember what kind of food it was, but it was very delicious. We didn’t go to the synagogue, though. In 1933 Hitler came to power in Germany. My father saw Germans during World War I and thought they were civilized people. My mother was afraid of Germans nonetheless. She was sure that if there was a war they would castrate Jewish boys. My father laughed at her. Nobody considered the possibility of a war with Germany, even after Germans occupied Poland. Nobody had any premonition of the war. Life was beginning to improve. In 1941 Misha and Broha finished the 10th grade at a Jewish school and were thinking of continuing their studies. My father had only studied at cheder and was very happy that his children would get a higher education. Everybody had great expectations of the future. I was a very vivid boy and interfered with Misha and Broha when they prepared for their exams. In May 1941 Mama sent me and my older sister Lisa to Aunt Musia in Moldavia. Her husband and daughter lived in the town of Bershad. This was a Jewish town. At least 80% of the population was Jewish. I was three and a half years old, Lisa was 16. At the beginning of the war my father was summoned to the front. Misha finished secondary school and submitted his documents to the Medical Academy in Leningrad. He went to the front instead and perished there. He was a tankman and had a platoon under his command. Almost all his classmates perished, none of the boys returned from the front. Almost all girls from the class, in which Misha and Broha studied, also perished.