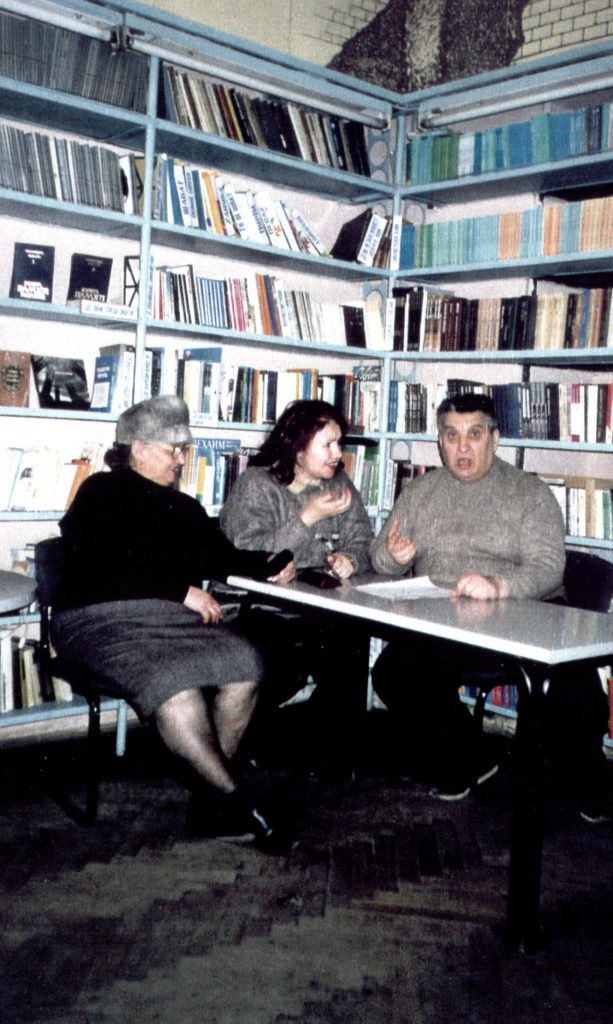 This is a picture of me and my colleagues at a meeting of the Jewish Charity Committee in Chernovtsy. The photo was taken in 1995. After Ukraine gained independence in 1991 many Jewish organizations opened in Chernovtsy. I was retired. I became a volunteer. There were 12 of us. We had to make lists of needy and elderly people and think of how to help them. Then there was a vacancy for a social worker. I got the job. I received a salary equivalent to US$ 15. In due time I founded the Jewish Charity Committee. I’m its director now. We look for opportunities to help needy and ill people. I find sponsors. We have a canteen where we provide meals for 60 people. The food comes from a restaurant, and it’s very delicious. During the meal I read a Jewish newspaper to the people. We discuss Jewish subjects and other issues. We have 25 children on our lists. Once every month and a half we send them food, clothes and medication. They are children with cerebral palsy, children of single mothers and orphans. We can also send a family 50 hrivna for medication, repairs in the apartment or for them to pay off their debts. I feel that people need me and that I can help them. But that’s not all. I realized that people need communication and culture besides physical survival. With the help of sponsors we established a round club. This club is open twice a week – one day for older and the other day for younger people. We discuss Jewish subjects and sing Jewish songs. Housewives share secrets of the Jewish cuisine. This is a little bit different from what I expected it to be. I thought people would be sitting at the tables rather than sitting at one long table. But we couldn’t afford it. In any case – it’s still an interesting pastime. I live here, in Ukraine, and this committee is my creation. I’ve been in Israel three times. I like it there, but I’m busy here. I know that if I emigrated to Israel I would be sitting at home thinking, ‘Well, where does it ache today?’. Whereas here I’m busy and have no possibility to get ill. I have a son, a sister and a brother in Israel, but I’m still here. I know that if I leave I will loose my contacts that I’ve established over the past 10 years. My assistant is learning how to work. But as it’s my ‘child’ I’m reluctant to leave it in somebody else’s hands, even the most caring ones. It’s most important that my people live and remember the place where we grew up. And that we know who we are, why we are here and what we are to do.