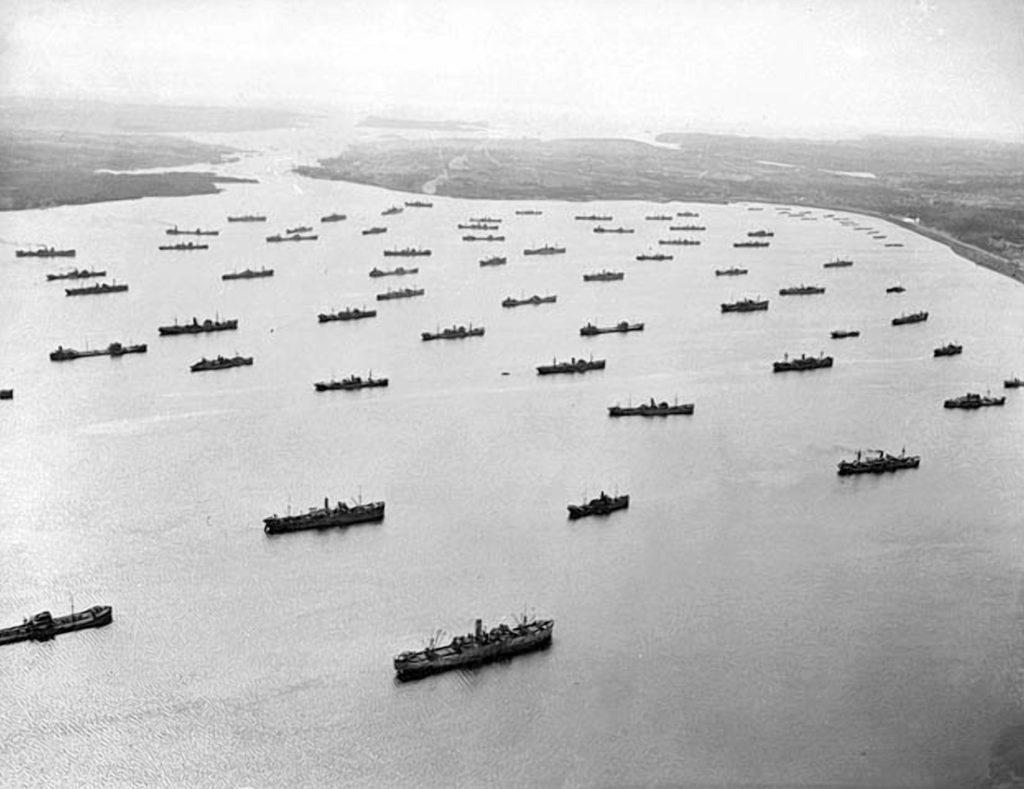 This photograph taken near Iceland in 1944. It shows the onvoy. Here I’ll tell you what it was and about my service there.

Well, a year passed. It was before the war, different military schools invited cadets. It was not absolutely voluntary: all Komsomol members were obliged to receive medical certificates. I did not mind to become a cadet: it seemed to me that in case of war it was necessary to defend our country. Moreover, I did not hold my College dear. At the 1st medical examination a doctor asked me whether I wanted to study at that military school. I did not (and I told her about it honestly). She found a nonexistent defect. Later I went through the medical examination selecting volunteers for the Navy. By that time I decided to be engaged in shipbuilding and told the doctor about it. I passed for general service and was sent to study at the Military School named after Frunze in Leningrad. It happened in 1938.

Since then all my life is connected with fleet. I was taken in as a cadet of the 2nd course. Training was absolutely different. They taught us not physics and mathematics, but navigation and astronomy, etc. Among our teachers there were many officers of the Tsarist Fleet. Every Saturday and Sunday they gave a ball. Each cadet received two permits: for himself and for his girlfriend. Our balls were well-known all over the city, and our graduates were considered to be suitable matches. I did not like those parties; I preferred to go to the swimming pool. I took part in it only once and was surprised to be a success. Later I understood the reason. At that time portraits of Stalin scholars were placed on a special honorable board [the best students of high schools received Stalin stipends] and my photo was among them.

In winter we studied and in summer we sailed. Our 1st summer we spent on board the Aurora Cruiser. [The Cruiser Aurora was launched in 1900. It took part in the October revolution of 1917. Now it is a museum.]

Next year we sailed on board fighting ships, and got to Liepaya (it was a foreign port at that time, but our military bases were already situated there). So I participated in the early stages of occupation of the Baltic countries. Our last training sail took place on the Ladoga Lake. We got to the well-known Valaam Island. Monks had already run away and the monastery was handed over to the Fleet. School of Sea Cadets was to be placed there. I was surprised to see the huge and tuned monastery farming. I got into the special library team. We had to check the monastic library and do away with the literature of White Guards. There I found not only religious, but also secular books. There I read a lot of books by different authors I never came across before.

Here I’ll tell you about the prewar days. Stalin tried to gain time. I know that our naval attache in Berlin got to know for sure that Germans were going to attack the USSR on June 22. He informed Kuznetsov (Naval Minister) about it, and Kuznetsov reported to Stalin. Stalin said “Don’t give way to provocations.” I guess Stalin could not believe that someone was more artful than him, and swept aside all hints about beginning of the war. On June 14 PRAVDA newspaper published denial by the Telegraph Agency of the Soviet Union: “…the Germans meet all their engagements, therefore we have to stop panic mood.’ And we were lucky in a certain sense. Naval minister N.G. Kuznetsov was very capable, resolute, a man of insight (in contrast to many army generals, for example Voroshylov and even Zhukov. At our School they told us that newspapers could write what they wanted, but we had to keep our powder dry. The point was that Kuznetsov visited Spain in 1937 and saw Spanish battleship shipwrecked by German airplanes. He was impressed. Therefore he introduced into practice the following rule: only one word had to be broadcast in case of danger and that word meant combat readiness. When the war burst out, he managed to transmit that word by radio, while generals of other armies wrote long encryptions which had to be decoded. That was why during the 1st days of the war no warships were destroyed, while almost all our aircrafts were crushed.

Here I’d like to get back a little. When I was a cadet, I got married. My first wife Galina was German. As soon as the communist leader of our crew got to know about it, I understood that there was no escaping fate. One day in our wardroom we were talking about prisoners of war. I expressed my opinion that not every prisoner of war was a traitor. The communist leader perverted my words and said that I called upon to give up. A week later I was read out of the Party and transferred from my ship. By that moment I had already taken part in 9 convoys. I was appointed a commander of the girls’ platoon (at that time they drafted girls). After my serious service, it was a hard blow to me, but it did not knock me down. I wrote a letter to the flagman navigator with a request to send me to some ship. A month later I was lucky to receive an assignment of navigator. Later I understood why it happened: shortly before the war the flagman navigator himself was arrested, therefore he understood well that accusations could be false.