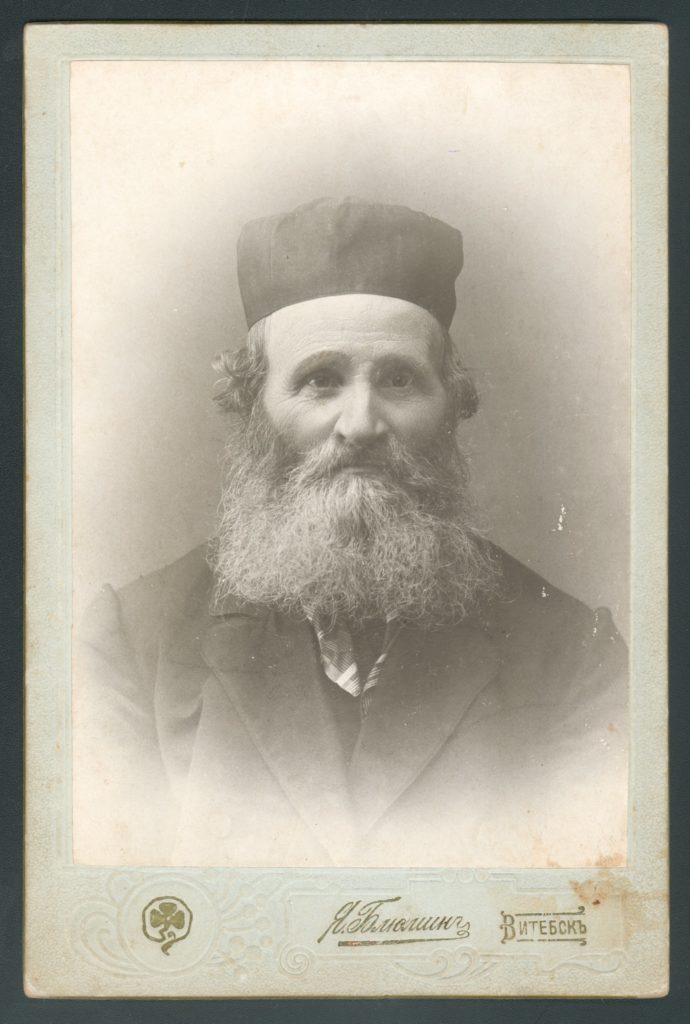 This is my father’s (Isaac Perlstein) father, Chaim Perlstein. The photo was taken in Vitebsk in 1900.

My paternal grandmother’s name was Genya and grandfather’s name was Chaim. They were born in Belarus. I don’t know the exact dates and places of their birth. Grandma raised the children – there were a lot of them, I don’t know exactly how many, and I don’t know any of them by name – and ran the big household. They lived not far from the ferry across the Dvina River. Grandpa was in charge of that ferriage across the Northern Dvina, ten kilometers from Vitebsk.

My brother Aron loved Grandpa very much. He visited him often when he traveled home via Vitebsk, talked to him about Jewish history. Grandpa also loved him a lot. I’ve never been to their house. I was born tenth in our family and I was the youngest, so I never met any of my grandfathers or grandmothers. I lived together with my parents, my brothers and sisters near Vitebsk, but opposite to where Grandma and Grandpa lived. According to my brother Aron, Grandpa Chaim was very pious and literate and he spoke Yiddish and Russian. Unfortunately, I know very little about Grandma and Grandpa and there is no one to ask, because I am the only one from our family who is alive. My grandparents were very beautiful people, they were very good-looking. Grandpa wore a beard and Grandma covered her hair with a kerchief. I was told that I resemble my grandma. I am not tall, just like she was.

Grandpa and Grandma Perlstein were very religious and celebrated all Jewish holidays. Grandpa recounted the Torah and the Jewish history to his children and grandchildren. Two of his elder sons helped him with his job, but when they grew up they left for America, so I never met them. Grandma died before Grandpa, in 1914. Grandpa lived for 98 years and died in the 1920s.

Before the Revolution people were very anti-Semitic, whole crowds organized and participated in Jewish pogroms. Grandpa had very good relations with the municipal officials, with the village constable and other people. Grandfather was a respected man. In the course of one such pogrom, when the crowd was supposed to pass Grandpa’s house, the village constable came to his place, sat on the house porch and when the crowd wanted to attack the house, he told them: ‘Everything’s fine, there’s no one here, pass by.’ So Grandpa’s house remained untouched and safe.