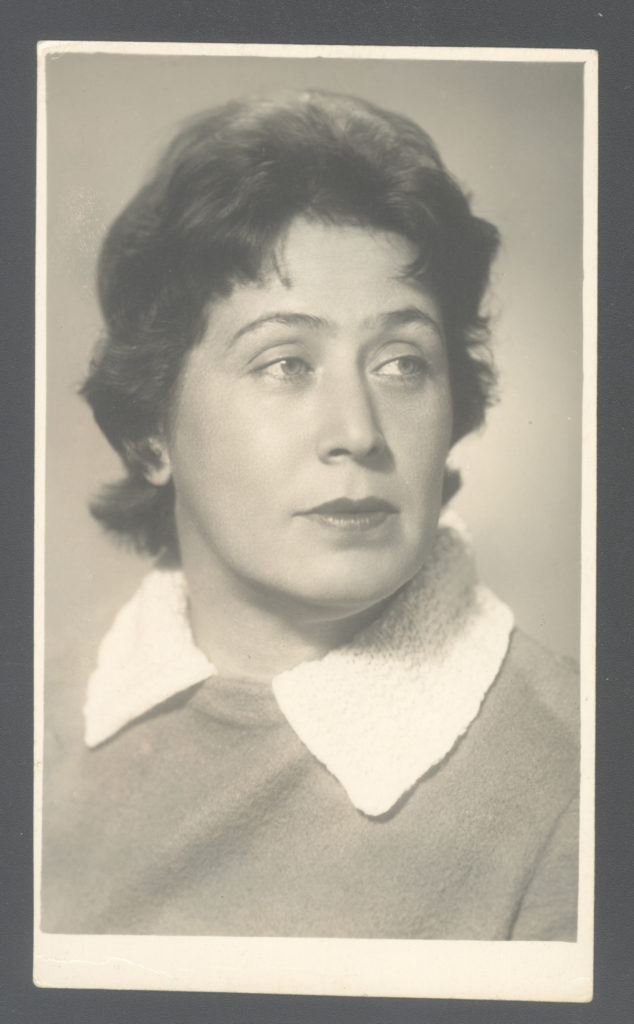 This is my aunt Bronya Selector, father’s cousin.

The photo was taken in Leningrad in 1950.

There was a whole story connected with Bronya Selector, my father’s cousin. Bronya was the daughter of Mariana Rubina, one of my grandmother Golda’s sisters. Bronya was a good friend of daddy’s.

When Bronya’s mother died she was 10 years old. She lived with her father and she didn’t get on well with her stepmother. She studied in a vocational school, was a very pretty girl, and some of her admirers helped her get a job in the radio committee.

The mother of my future husband Garry Kolton, Alexandra Kolton, worked there, too. Alexandra and Bronya had once been very good friends, but for some reason had a quarrel and didn’t communicate for some time.

Later, after the war, Bronya began to work as a concertmaster in the Big Hall of the Leningrad Philharmonic Society.

In 1956 Alexandra’s brother approached her at a concert – he was simply at that concert and wanted to have a word with an acquaintance. After that meeting Bronya visited Alexandra, and they resumed their friendship.

Aunt Bronya had one idée fixe: to get me married. When Alexandra saw me at Bronya’s birthday party she liked me very much. She asked Bronya to invite me to the birthday party of her daughter Aida.

I was seventeen-and-a-half years old. I said I was not going anywhere, let alone to unfamiliar people. But Bronya did her best to persuade me! And Alexandra herself called me and said: ‘I ask you very much to come.’ I couldn’t refuse, and my brother and I set off to that birthday party.

All the family was absolutely unfamiliar to me, but I’d already heard a lot about them from Bronya. I remember how I entered and saw the very charming smile of my future husband Garry. That’s how we met.