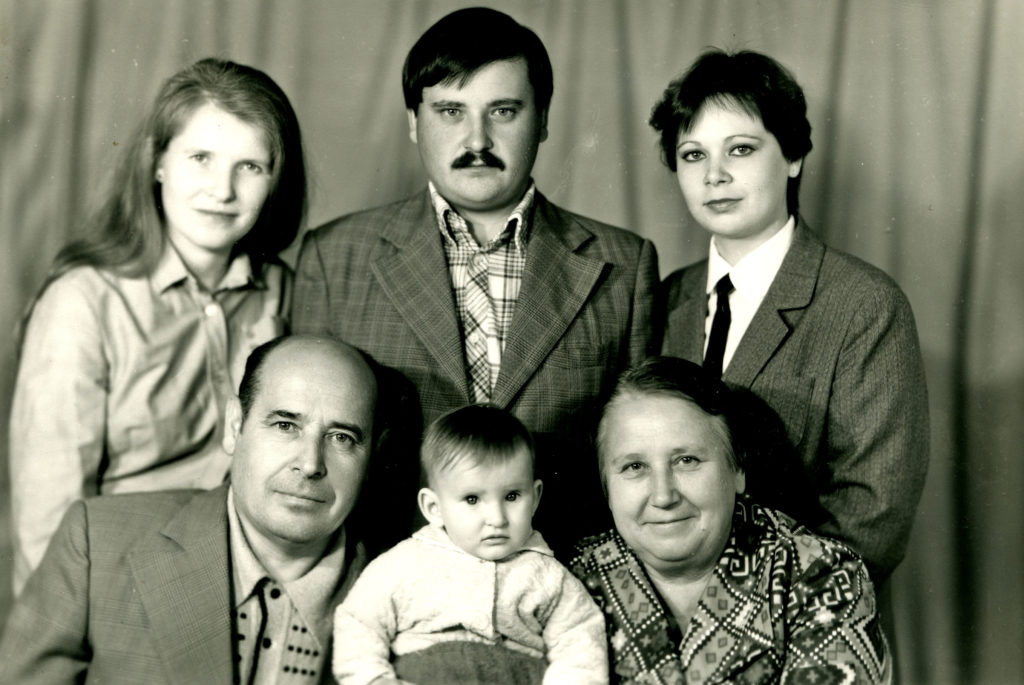 Boris Falevich and his family

This is my older brother Boris Falevich’s family. Standing:

Boris’ daughter Maria Kulesh, in the center is Boris’ son Iosif and his daughter Tatiana.

Sitting from left to right: my brother Boris, his wife Zina, they are holding their granddaughter Anna. This photo was taken in Slutsk in 1983.

When my brother went to the army in 1949 life became even harder for my mother and me. Our main product was potatoes, but then we didn’t always have it.

There was no hope for the better or any opportunity to earn some money. I don’t know how Mama and I lived through these years before Boris returned.

When my brother returned home, he didn’t even take a day’s rest. When he saw how we lived, he was terrified. The following day he went to the plant he used to work at.

When I finished school in 1953, Boris went to the evening school, and quit his studies after finishing the eighth grade. He never gave up his job at the plant where he worked 50 years less three-year service in the army.

There’s a couple of months’ difference between them. Boris has three grandchildren. Iosif is married to Galina, a Russian woman. They have two daughters.

The older one is Tatiana, and the younger one is Anna. Maria married a Jewish guy. Her marital name is Kulesh. Maria has a daughter. Recently Maria and her family moved to Israel. I hope they will manage well.

My brother and his wife live in Slutsk. My brother is very ill. He used to be a strong and healthy man, but life has overburdened him so much that he is fearful to look at.

There is nothing to do about it. This is what life is like… There is only he and I of our family left in Slutsk.