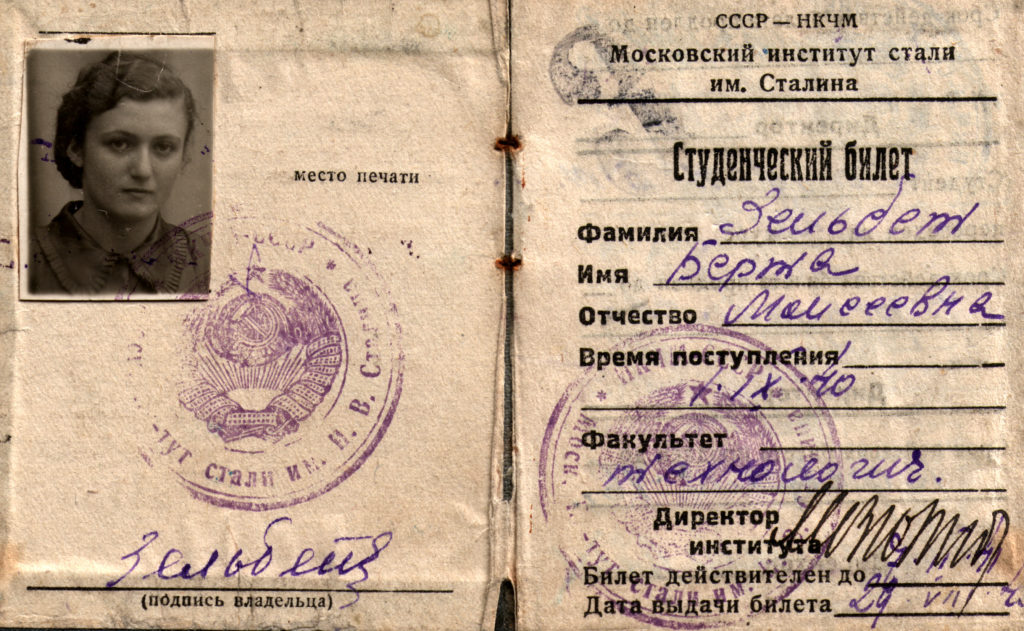 This is my student’s card, issued to Berta Zelbert, the student of Technological Department of Moscow Steel and Alloys Institute named after Stalin. I entered the institute on the 1st of September 1940.

When I turned 8, I went to compulsory 8-year Ukrainian schools. After the 4th grade I was transferred to Russian school, because it was a 10-year one. There Ukrainian was taught like one of the subjects. I still know Ukrainian. I had been an excellent student for 10 school years. We had wonderful teachers. I liked literature most of all. I composed verses. They were placed in school wall newspaper. There was a good All-Union pioneer organization in the town. There were a lot of groups there: radio, literature circles, jazz studio. All schoolchildren went there after school. I was enrolled in literature circle for couple of years. I had a cloudless childhood. I was a great patriot, an active pioneer and later Komsomol member. I took part in demonstrations during Soviet holidays. We marked them both in school and at home. They were joyful and long-awaited for us. I and my coevals were avid readers of books about revolution. The characters of those books took part in revolution and civil war. They were idols for us.

I finished school with honors and was entitled to enter the institute without preliminary entrance exams. I wanted to enter biological department of Moscow University [M. V. Lomonosov Moscow State University, the best University in the Soviet Union, also well known abroad for its high level of education and research]. I decided to become physiologist. Neither I nor my parents paid attention to my appeal to literature. It was considered that there should be some profession, and literature should be left for leisure. It seemed to me that there would be brilliant future ahead of me- studies in Moscow, but there were other things in store for me.

I sent out letters to several institutions of higher education asking whether they could provide a room in the dormitory for me. I sent a letter to Moscow and Leningrad universities. I got a letter from Moscow Institute of Steel and Alloys, where it was indicated that I had been admitted and would be provided with the dormitory. I thought that engineers were in demand in our country and I decided to enter the institute. In August 1939 I left for Moscow. I was admitted to the institute and given a room in the dorms. The dormitory was located in a very interesting place called ‘commune-house’. It was a long 7-storied building on props. The walls, consisting of wooden boards, at the bottom were one meter long, there was an opal glass above them. There were no common rooms in the building, just separate cubicles. There was not enough room, but still each student had a separate place with a bed and a table. I was deeply immersed in studies and social life of the institute. Students were of different nationalities, there was no national discrimination. I did not feel any anti-Semitism. My life became very interesting. New pals, institute, dorms… I went to museums and theatre with my chums. For the first time in my life I was in Bolshoy theatre. I saw ballet Swan Lake composed by P. Chaikovskiy. I was rapt. Then I tried to save some money from scholarship to be able to go to Bolshoy Theatre.

During the first years of my studies at the institute I met future husband Simeon Gorelik. Simeon studied at our institute at the senior course and was often in that hostel. We met there. We must have liked each other at once and decided to date.

The calamity came unexpected. It was a weekend day, the 22 of June 1941. We did not have classes at the institute. All of a sudden the secretary of Komsomol Committee came to the hostel and announced that the war had been unleashed…