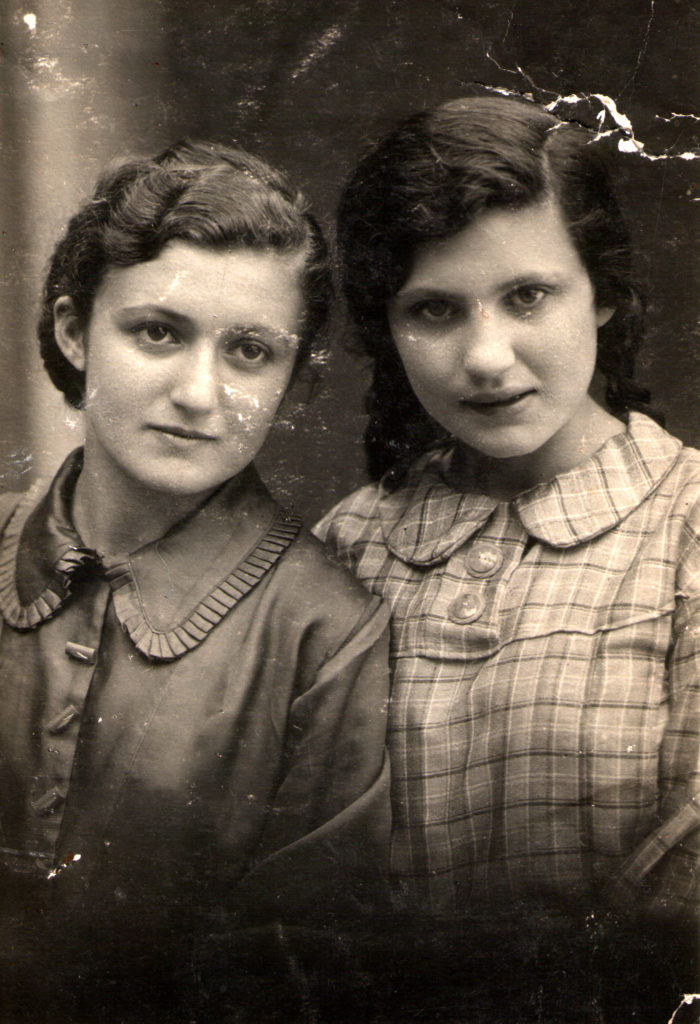 This is a photo of me (to the left) with my junior sister Eniya Zelbert. The picture was made in Berdyansk in 1936.

I was born in 1922. I was called Batsheva. In 1925 my junior sister Enia Zelbert was born. We called her Gena. My parents loved each other. Our family was friendly and happy. Father was very kind, tactful and wise. Mother was a beautiful women and a good housewife.

When I turned 8, I went to compulsory 8-year Ukrainian schools. The choice was justified because it was close to our house and nobody had to take me in/from the school. All subjects were taught in Ukrainian. I was a good student and kept out of trouble. I had studied in Ukrainian school for 4 years, so my Ukrainian was good and I could read Ukrainian books. After the 4th grade I was transferred to Russian school, because it was a 10-year one. There Ukrainian was taught like one of the subjects. I still know Ukrainian. I had been an excellent student for 10 school years. We had wonderful teachers. Mathematics teacher was German, he was a very gifted mathematician and a teacher. His last name was Herman. He praised me and said that in future I would become a good scientist-mathematician. There were other good teachers as well. I liked literature most of all. I composed verses. They were placed in school wall newspaper. There was a good All-Union pioneer organization in the town. There were a lot of groups there: radio, literature circles, jazz studio. All schoolchildren went there after school. I was enrolled in literature circle for couple of years. I had a cloudless childhood. I was a great patriot, an active pioneer and later Komsomol member. I took part in demonstrations during Soviet holidays. We marked them both in school and at home. They were joyful and long-awaited for us. I and my coevals were avid readers of books about revolution. The characters of those books took part in revolution and civil war. They were idols for us. We adored a popular band at that time and its leader – the singer Leonid Utyosov. We could have listened to them by radio for hours. I also remember a popular movie about happy life of common workers in the USSR “Hilarious guys”, where Utyosov played the part. I did not feel anti-Semitism before war. I think it did not exist. There were Jews and non-Jews among my friends. I did not care about nationality at all.

I was called Baya at home. It is a diminutive from Batsheva. When I came to school I was called Bella there. At the age of 16 I came to get my passport and the lady put the name Berta in my document.

I finished school with honors and was entitled to enter the institute without preliminary entrance exams. I wanted to enter biological department of Moscow University. Neither I nor my parents paid attention to my appeal to literature. It was considered that there should be some profession, and literature should be left for leisure. It seemed to me that there would be brilliant future ahead of me- studies in Moscow, but there were other things in store for me.

I sent out letters to several institutions of higher education asking whether they could provide a room in the dormitory for me. I sent a letter to Moscow and Leningrad universities and to Moscow Institute of Physiology. I got a letter from Moscow Institute of Steel and Alloys, where it was indicated that I had been admitted and would be provided with the dormitory. I thought that engineers were in demand in our country and I decided to enter the institute. In August 1939 I left for Moscow. I was admitted to the institute and given a room in the dorms. My life became very interesting. New pals, institute, dorms… I went to museums and theatre with my chums. For the first time in my life I was in Bolshoy theatre. I saw ballet Swan Lake composed by P. Chaikovskiy. I was rapt. Then I tried to save some money from scholarship to be able to go to Bolshoy Theatre.