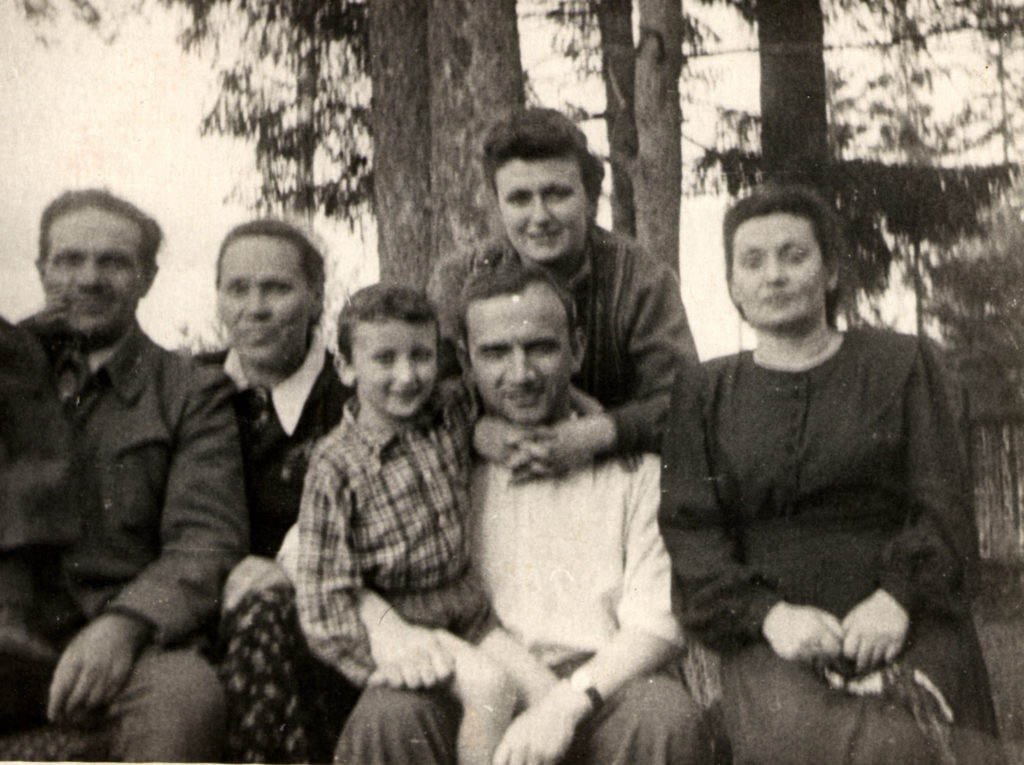 Berta Zelbert with her family

The picture was made in 1951 at our dacha out of Moscow. From left to right: my father Moses Zelbert, his second wife Anna Torgasheva, my son Evgeniy, my husband Simeon Gorelik , I and my aunt Anna Isaacova.

I was demobilized in July, 1945. Upon demobilization I went to my father in Derbent, where he was during evacuation. When father lived in Derbent he married a Russian women Anna Torgasheva, who a doctor in the hospital, where father was working. Anna was a very good woman- kind and caring. My junior sister still went to school. They lived in Anna’s place. I was really happy to see my kin, but I was not going to stay with them. I wanted to return to my institute. I was given a certificate at the military enlistment office in Derbernt saying that I was not liable for military service. Then I was issued a passport using the data from that certificate. I went to Moscow.

After war father lived in Derbent with his second wife Anna Torgasheva. They lived very well, in full harmony. They came to Moscow for a couple of times and stayed in the family. Anna died before father in 1981. Father lived by himself. He caught cold and died in 1982. I do not know if there was a Jewish cemetery in Derbent. I do not think there was. Jewish rites were not observed at the funeral. Father used to communicate with the family of my sister Gena. They were friends with her husband Lesghin. He kept in touch with Dovletkhanov’s family. They loved him. So, it was a secular funeral.

I regained my studies at get institute. I was enrolled for the 3rd course and moved to the dormitory where I used to live before war. Then I got ill. I had a sharp pain in abdomen and my roommate took me to the hospital. By chance she met Simeon Gorelik, whom I knew before war. I said that I returned to the institute, but was to be hospitalized at the moment. He came to the hospital immediately. We met for the first time after the war and never parted again. On the 2nd of December 1945 we got married. Simeon had a room in a communal apartment. When we got married, I left the dormitory and moved to Simeon.

In 1946 I gave birth to my son Evgeniy. I was still studying and writing my diploma. It was difficult: family, house chores. We lived separately from Simeon’s parents in a small room which he previously got. My mother-in-law Rosa Gorelik was of big help. My son was in day nursery before he caught whooping-cough. She was ill for a long time. I did not give him the day-nursery after that and we hired a babysitter. She was an elderly lady. When son was fit for the kindergarten, I took him there. In 1948 I finished institute and got a mandatory job assignment at Moscow 2nd bearing fund not far from our house. I had worked there for 12 years.

In 1951 my daughter Olga was born. Our family was always friendly. Children were raised to be honest, respect and love family and parents. They knew that they were Jews and did not reject it. Though, they were not raised Jewish. Husband and I did not stick to the traditions in everyday life. There were few people in Moscow who raised children in Jewish traditions. Thy were raised in international spirit. Our son married a Russian girl and my elder grandson also is married to a Russian. There were no national discords in our family.