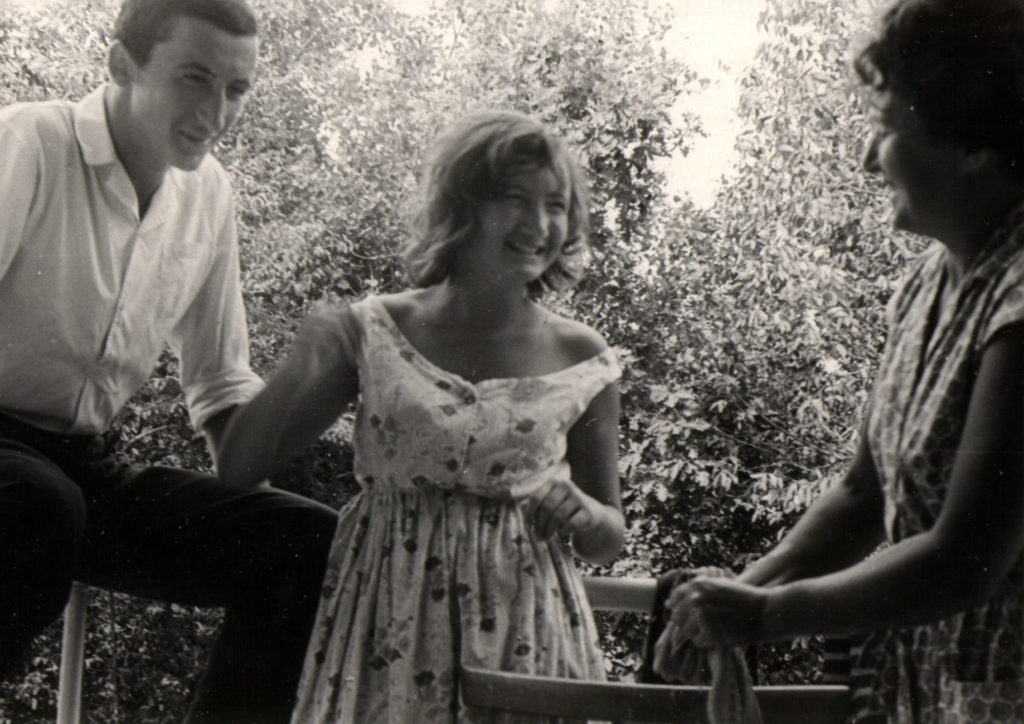 Berta Zelbert with her children: Evgeniy Gorelik and Olga Gorelik

This is me with my children: son Evgeniy Gorelik, daughter Olga Gorelik on summer resort. The picture was made in 1960 on the balcony of our hotel suite in Kaliningrad, where were spend summer vacation.

I was demobilized in July, 1945. I regained my studies at get institute. I was enrolled for the 3rd course and moved to the dormitory where I used to live before war. Then I got ill. I had a sharp pain in abdomen and my roommate took me to the hospital. By chance she met Simeon Gorelik, whom I knew before war. I said that I returned to the institute, but was to be hospitalized at the moment. He came to the hospital immediately. We met for the first time after the war and never parted again. On the 2nd of December 1945 we got married. Simeon had a room in a communal apartment. When we got married, I left the dormitory and moved to Simeon.

In 1946 I gave birth to my son Evgeniy. I was still studying and writing my diploma. It was difficult: family, house chores. We lived separately from Simeon’s parents in a small room which he previously got. My mother-in-law Rosa Gorelik was of big help. My son was in day nursery before he caught whooping-cough. She was ill for a long time. I did not give him the day-nursery after that and we hired a babysitter. She was an elderly lady. When son was fit for the kindergarten, I took him there. In 1948 I finished institute and got a mandatory job assignment at Moscow 2nd bearing fund not far from our house. I had worked there for 12 years.

In 1951 my daughter Olga was born. Our family was always friendly. Children were raised to be honest, respect and love family and parents. They knew that they were Jews and did not reject it. Though, they were not raised Jewish. Husband and I did not stick to the traditions in everyday life. There were few people in Moscow who raised children in Jewish traditions. Thy were raised in international spirit. Our son married a Russian girl and my elder grandson also is married to a Russian. There were no national discords in our family.

I think we always pertained to the middle class- neither rich nor poor. I do not remember times when we had to borrow money from somebody because there was not enough before the salary. We always bought things we could afford. We were lucky to buy dacha [summer house] dirt cheap. It was sold to us by husband’s friend from childhood. It was half of the house out of Moscow. Our children grew up there. Our family used to like spending time there on the weekends and during vacations and we still do. We liked to mark holidays at home. We always marked birthdays of all family members. Of course, we celebrated the soviet holidays liked by us since childhood – 1st of May, 7th of November, Soviet Army Day, Victory Day.

Children got good education. Evgeniy finished Moscow State University, Applied Mathematics Department. He is currently working for one of the commercial banks in Moscow. Olga finished Moscow institute of Steel and Alloys. She worked in a scientific research institute. She has 2 children and a grandson. She recently stopped working. Now she is a housewife. Now I have 3 grandchildren and one great grandchild. Evgeniy has a son Dmitriy Gorelik and daughters Olga has two sons: Sergey and Mikhail Shtern. My great grandson’s is Artyom Shtern, Sergey’s son.

When I was working at the plant I entered post-graduate evening school by Energy Institute and defended candidate dissertation. I was deputy of the chief metallurgist of the plant. Being the candidate of science I went to work in All-Union Institute of Bearing Industry. I started as an engineer and was promoted to the position of the laboratory chief. I had worked for that institute by 1987 and retired.