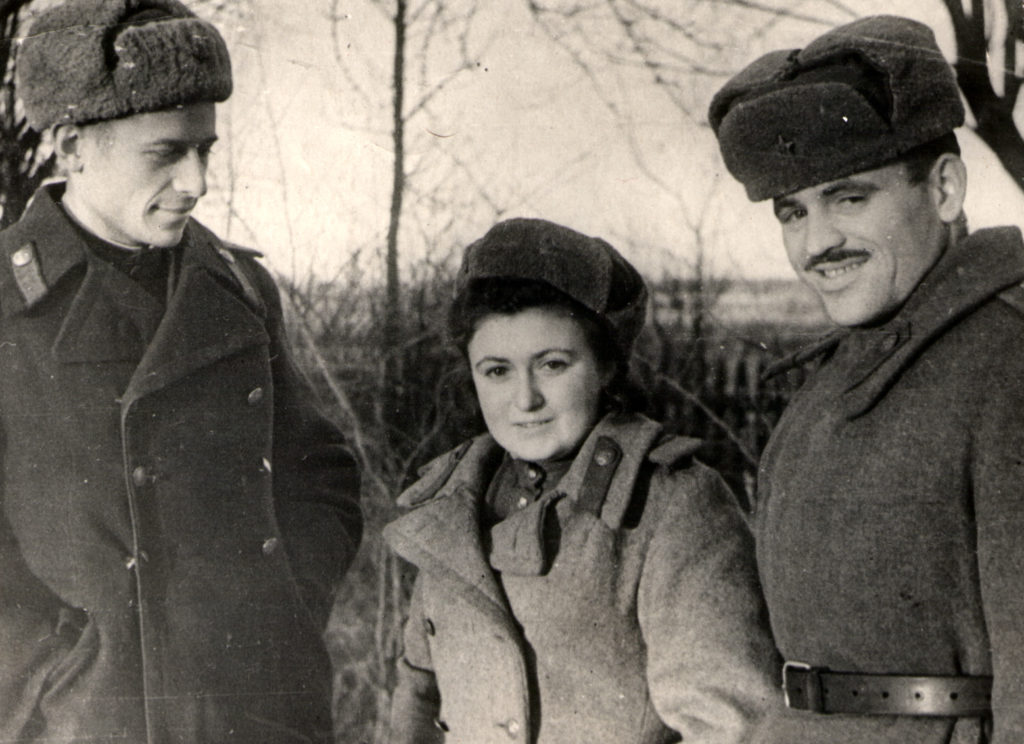 Berta Zelbert and her friends

This is me (in the center) at the congress of military writers and poets. The picture was made in Konigsberg in March 1945. Unfortunately, I do remember neither last nor first names of the people on this picture.

In October 1942 we finished school of junior aircraft experts #66, located in the vicinity of Novosibirsk [about 2800 km to the east from Moscow], and I got the rank of sergeant. Five more people and I were sent to the front to the place by Maloyaroslavets, Kaluga oblast [about 115 km to the south- west from Moscow]. We went to Maloyaroslavets by train. We started work at radio station. It was a powerful radio station, installed in a covered truck. It was called battle radio station. Our work was to hear the signals over headphones in the chaos of sounds, respond, connect with the radio station, which was seeking us, and record the message. Good knowledge of Morse code was necessary for that. We really knew it very well. We worked in shifts, each consisted of the chief of radio station, mechanic and three radio operators. We were called radio telegraphists (code operators). Most radio operators were girls, but there were boys as well, but very few. Radio stations were always based on the edge of the aerodrome. I was to be disguised. Battalion consisted of reconnoiters, telephone operators and code operators. There was a cook and some other support staff. On a new position (we were constantly moving towards west) we knew the certain place where we were supposed to settle. The reconnoiters were to come to the place of the re-dislocation to find a certain place. Besides, if we had to spend a night in the dugs-out, they made bunks for us or perched tents. We worked on field aerodromes. They were not based on the very leading edge, but close to it. We always were by aerodrome and worked with the aircrafts, taking off from aerodrome. They transmitted messages during reconnaissance or battle. We took the messages and sent them to the headquarters of our battalion.

Pilots lived separately from aerodrome support staff, but we got in touch on different occasions. We talked to them and dreamt what we would be doing after war. I was surrounded by young people, mostly 20-year old guys and girls. Those, who were over 30, seemed old to us. When we had spare time we had amateur contests, where we sang, recited verses, told funny stories: youth… I composed verses, I even sent them to the paper of the first airforce army “Stalinsk pilot”. I was sent to the meeting of young poets and prose writes, arranged by the paper “Stalinsk pilot”. I remember that for the holiday of the 7th of November our political officer told me to write a poem- for the choir to sing it and for people to recite it. I wrote a poem about Stalin and Lenin. We also had dancing parties. Those who were off duty came over to dance. There was courtship and flirtation and love.

We had been moving westward. We started from Maloyaroslavets, then moved to Smolensk. We stayed in Lithuania for a while. Then we went through Poland and later came to Eastern Prussia. then we moved to Konigsberg. The operation on capturing Konigsberg lasted from the 6th till 9th or 10th of April.

We could feel that the war was winding up. One night we heard the shooting while we were sleeping in the tent of the ladies -radio operators. We darted outside and saw that our tank men were shooting in the air from all the weapons they had. They were celebrating Victory Day. We were overwhelmed with joy. The whole garrison was on parade.

I got awards at the end of war. I was given a medal “For Bravery”, medal “For Liberation of Konigsberg”. After war I got jubilee medals, devoted to commemoration of the dates of the Victory Day Great Patriotic War Order of the first class.

After victory I stayed in Konigsberg for a while. There was a party committee and I was assigned in charge of it. I became the candidate of the party on the front and when I returned home I became the member of the party. I was demobilized in July, 1945.