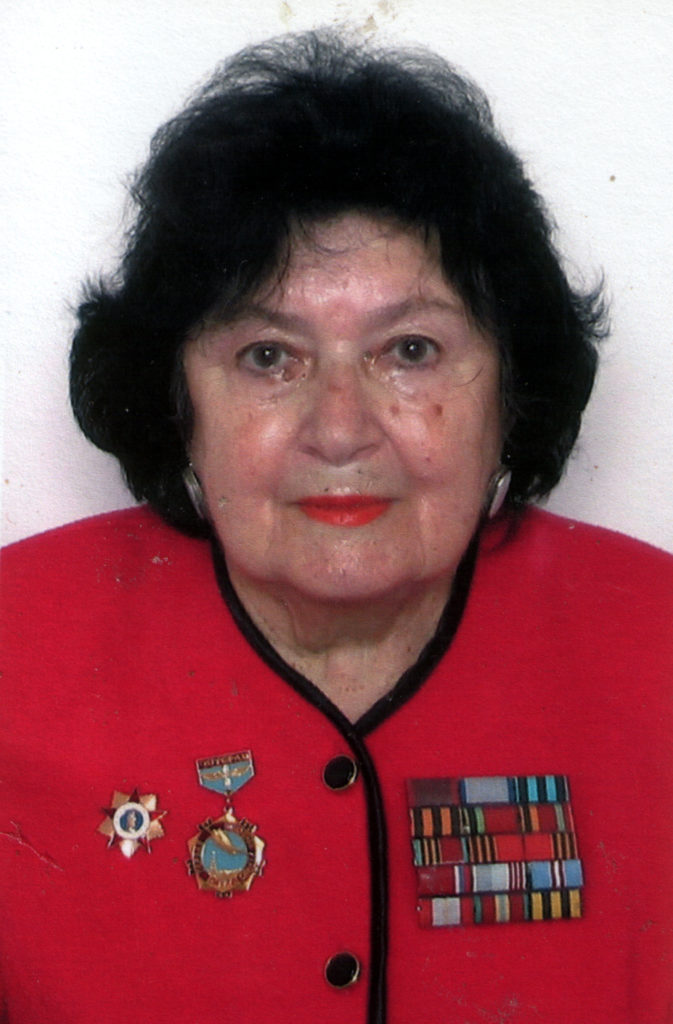 This is me now. There is Great Patriotic War Order and jubilee medal of the air force army #1 on my jacket. The picture was made in Moscow on the 9th of May 2004 for the board of honor.

In 1948 I finished Institute Steel and Alloys and got a mandatory job assignment at Moscow 2nd bearing fund not far from our house. I had worked there for 12 years. When I was working at the plant I entered post-graduate evening school by Energy Institute and defended candidate dissertation. I was deputy of the chief metallurgist of the plant. Being the candidate of science I went to work in All-Union Institute of Bearing Industry. I started as an engineer and was promoted to the position of the laboratory chief. I had worked for that institute by 1987 and retired.

Children got good education. Evgeniy finished Moscow State University, Applied Mathematics Department. He is currently working for one of the commercial banks in Moscow. Olga finished Moscow institute of Steel and Alloys. She worked in a scientific research institute. She has 2 children and a grandson. She recently stopped working. Now she is a housewife. Now I have 3 grandchildren and one great grandchild. Evgeniy has a son Dmitriy Gorelik and daughters Olga has two sons: Sergey and Mikhail Shtern. My great grandson’s is Artyom Shtern, Sergey’s son.

I think we always pertained to the middle class- neither rich nor poor. I do not remember times when we had to borrow money from somebody because there was not enough before the salary. We always bought things we could afford. We were lucky to buy dacha [summer house] dirt cheap. It was sold to us by husband’s friend from childhood. It was half of the house out of Moscow. Our children grew up there. Our family used to like spending time there on the weekends and during vacations and we still do. We liked to mark holidays at home. We always marked birthdays of all family members. Of course, we celebrated the soviet holidays liked by us since childhood – 1st of May, 7th of November, Soviet Army Day, Victory Day.

Husband and I traveled a lot both in the USSR and abroad. Besides, we went skiing on winter vacation for two weeks. When it became possible to take tourist trips abroad, we enjoyed traveling throughout the world, for example in 1966 we took a tour Cuba-Czechoslovakia-Italy. We went to India to Ceylon. I was in Paris and Portugal. Then my husband went to Paris with me. We also went to London. So, I think we have seen quite a lot around the world. Husband and I visited our niece in Israel to see how they live there. We liked the state. Anyway I would not like to stay there. I did not want to leave Moscow.

Now I am taking part in Jewish social life. I am a member of the group of the Friendship with Israel, International Board of Russian Committee of Russian Veterans of War. I am working for that group. Sometimes we get requests to provide charitable assistance and we are doing it. Now we got a request from the Jewish community Fund ‘Hurry to do Good’ to assist the victims of the terror in Israel and Russia. We responded to that request. We can afford it. I think we have a comfortable living. I have a rather decent pension for being a veteran of war. My husband works and receives pension. We are not needy.