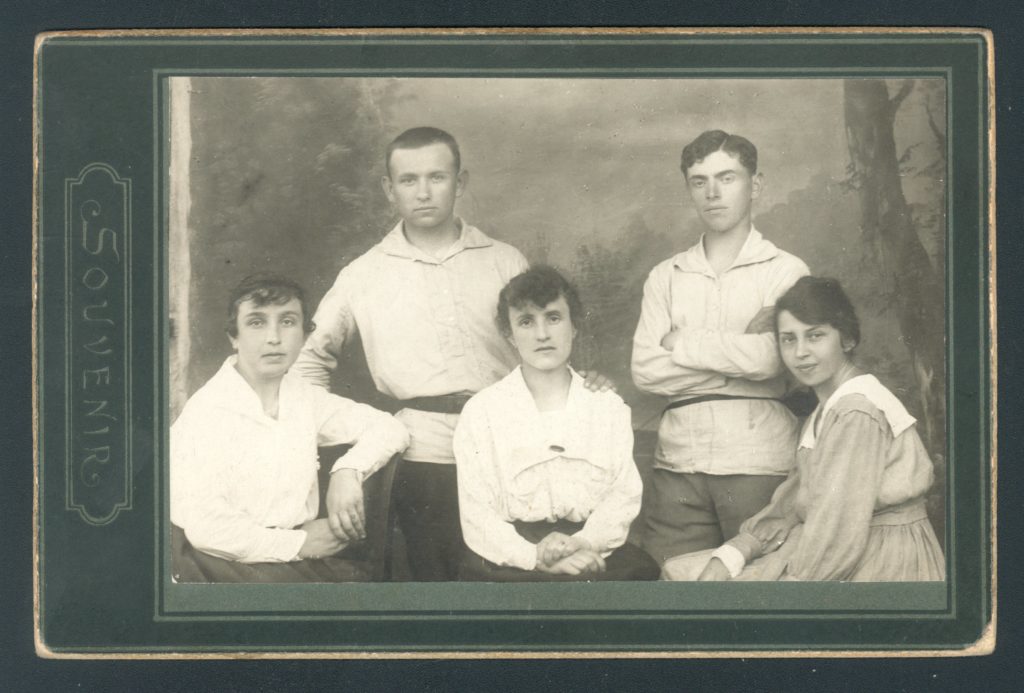 Aron Perlstein and Rasya Sigalevich with their friends

This is my elder brother Aron Perlstein (standing first from left), 18 years old; my sister Rasya Sigalevich is third in the middle from left, she is 20 years old. All the rest are their friends from Yanovichi, I don’t know them. The photo was taken in Yanovichi in 1918.

My three brothers Aron, Iosif and Grigory, joined the military. Aron, the eldest among them, was a pilot and worked as an instructor in the Crimea, not far from Simferopol, and later as head of the Aircraft School in the cities of Poltava and Kherson. In 1938 he was arrested on a false accusation of sabotage. He spent almost a year in prison, later he was acquitted and transferred to Moscow to the Gosaviakhim Administration. He took part in the Great Patriotic War, was at the front and died in Moscow in 1977, holding the rank of colonel. His wife was Jewish, her name was Arshanskaya. They had two children, son Evgeniy and daughter Vera.

My sister Raisa, or Rasya, lived in Yanovichi borough and was a housewife. Her husband Sigalevich-Grigoryev and son Isaac were murdered by the Germans on 10th September 1941. Only her son Lev managed to escape the massacre and remained alive. He got into the military school and served in a tank unit. He retired holding the rank of lieutenant colonel.