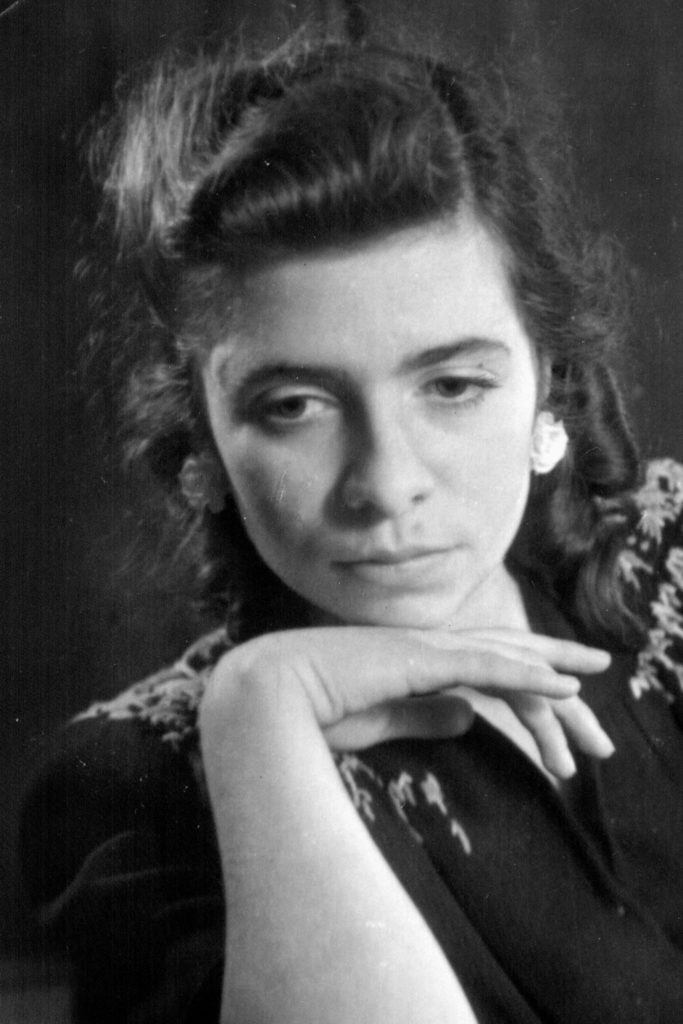 This photograph was taken in a Moscow photo studio in 1945. It shows my sister. Here I’ll tell you about our childhood.

In 1923 my sister Judith was born. I became an elder brother. Since I was 6, parents started to beat me if they considered me not to meet requirements of that role. But I was very much pleased to have a sister. My sister was my best friend when we were children. And later we became very close.

My sister finished school in Kiev, and entered Medical College in Ufa, in evacuation (she graduated from it in Moscow). My sister was a very capable person. She worked in Moscow; she was a well-known doctor, specialist in hematology. Unfortunately last year she died. I miss her very much. She had got a daughter Vera and a grandson.

In 1924 father moved to Kazan, where he became a director of the same office. A little bit later we joined him in Kazan. I remember that our steamship stopped at the place of junction of Kama to Volga rivers, and another steamship coming from the opposite direction moored to our steamship. From that steamship father came aboard our one: that was the way he met us. In Kazan we lived in the apartment on the 2nd floor of a house. There was a large yard full of trees. In the apartment there was a bathroom (it was very uncommon at that time). My Mom was a very sociable woman, she used to invite all old women from the neighboring houses to have a bath. After a bath, they used to twist their heads round with towels, drink tea and speak about peace time, i.e. about the time before the World War I. I listened to their stories with great interest. You know, human memory is very deceptive, no doubt. When I got to Kazan in 1980s and found our former house, I understood that it was small, and the yard was small, too. Probably it was me who grew up.

In 1927 father was advanced again and sent to Kiev. In Kiev he bought half of an apartment. Therefore in fact we lived in a communal apartment. Soon NEP was abandoned, father’s office was closed, and (as I understand now) father realized that no good would come of commercial activities in the USSR. He found a job at glass-works. Soon he became a chief engineer at glass-works near Zhitomir (close to the border with Poland). Altogether he worked at 2 glass-works 6 or 7 years.

Father worked very well. His main task was to support technological process in glass-furnaces. He managed. We lived in Kiev and we visited him only in summer. Having worked there several years, father expected no lift in his career, because he had no special education. He went on semi-annual leave, and graduated from the Kiev Polytechnic College (Ceramic Faculty) without attending lectures. He studied days and nights. As soon as he got his diploma, he was appointed a chief engineer at large glass-works near Kharkov. There he worked for a year, and then was invited to be a chief engineer at the new factory producing thermos bottles (in Kiev). There he worked very successfully, too (his photo could be found on the board of honor). We were not rich (we could not imagine richness), but we were not poor. I remember that one day my father, a chief engineer, received a bonus. He spent that sum of money having bought a big water-melon and a loaf of black bread. Mom rented out one room (I guess she had to). She knitted very well for all of us (my sister was always well-dressed).

In summer we used to leave for vacation. Sometimes we went to the Black Sea, sometimes rented small houses in the neighboring villages.