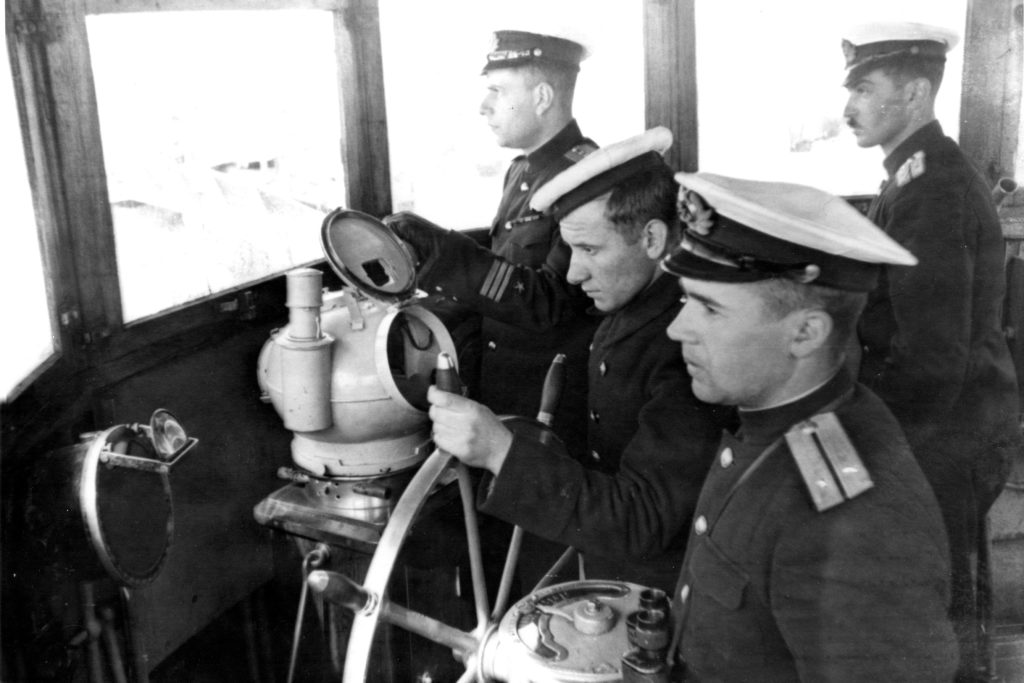 Anatoly Lifshits on the Captain’s bridge of the Torpedo boat

This photograph was taken in 1947 on the captain’s bridge of my torpedo boat. Here I’d like to tell you about my service at the end of the war and during the first years of quiet after the war.

One day in our wardroom we were talking about prisoners of war. I expressed my opinion that not every prisoner of war was a traitor. The communist leader perverted my words and said that I called upon to give up. A week later I was read out of the Party and transferred from my ship. By that moment I had already taken part in 9 convoys. I was appointed a commander of the girls’ platoon (at that time they drafted girls). After my serious service, it was a hard blow to me, but it did not knock me down. I wrote a letter to the flagman navigator with a request to send me to some ship. A month later I was lucky to receive an assignment of navigator. Later I understood why it happened: shortly before the war the flagman navigator himself was arrested, therefore he understood well that accusations could be false.

I got to an absolutely different ship: a mobilized sweep vessel. It had 2 small guns and carried out patrol service at the entrance of Kola bay. That ship was an easy target. Flying back after an unfortunate bombardment of Murmansk, German airplanes always had an opportunity to bomb our vessel. A lot of such trawlers went down, but we were lucky. One day we received a radiogram: to the north they found a boat going full stream and carrying 50 people, more dead than alive (they were from a bombed-out convoy). We found them, lifted aboard, warmed up, and brought to the hospital. Fifty years later Englishmen, participants of northern convoys, visited Leningrad. I spoke at that meeting and told that story. A month later I received a letter from England from one of those rescued guys. We are in touch now.

At that ship I was the only professional soldier. I served there 8 months. I am not going to bore you with technical details, I’ll tell you only that I noticed certain disorders in navigation system and informed the flagman navigator. They set eyes on me and sent me from the trawler to a fighting ship. Later I started serving on board the Razumny torpedo boat and served there till the end of the war. I finished war as a captain of the torpedo boat.

So the war was finished. I was awarded 4 orders: Orders of the Great Patriotic War both 1st and 2nd Class and 2 Orders of the Red Star. I have got more than 20 medals. After the end of the war I served 2 more years at the same torpedo boat: we trained sailors and arranged group firing.