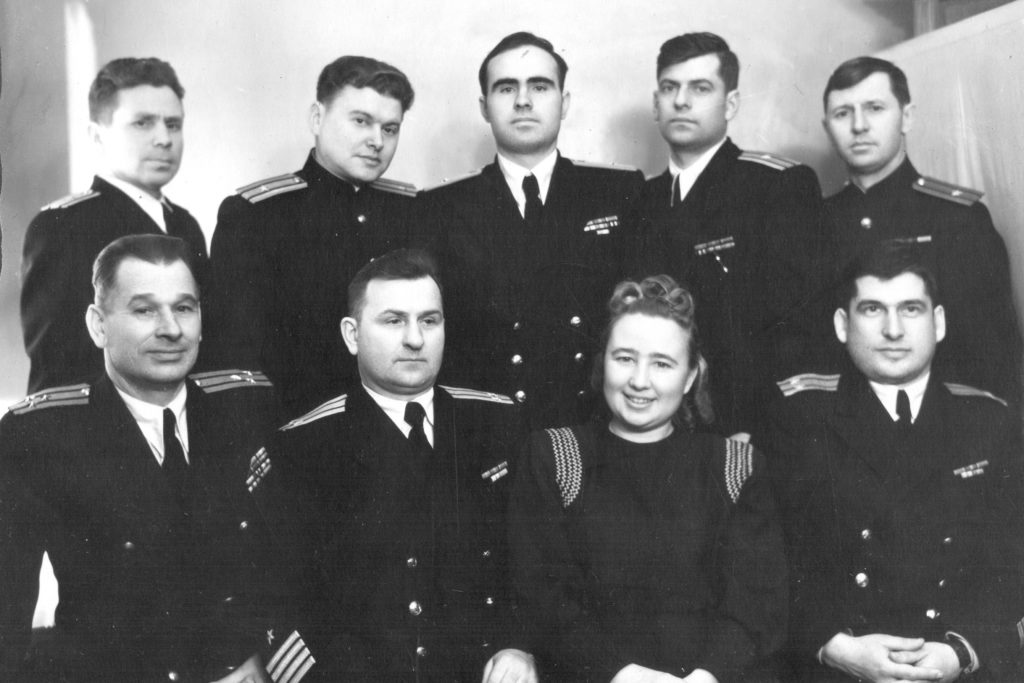 Anatoly Lifshits in the Naval Academy named after Voroshilov

This photo was taken in Leningrad when I studued at the Naval Academy named after Voroshilov. Here I’ll tell you about my life during that time and about my subsequent service.

In 1947 I entered the Naval Academy named after Voroshilov in Leningrad. It was not an easy task, because there was a large entry, but I managed. I was a very good cadet. Among other subjects they taught us bases of Marxism and Leninism (of course!). And I made the most terrible boner: discussing the works of communist scholars (Lenin, in particular) I called one of his books (I do not know why!) notorious. I meant nothing, but it appeared to be enough to expel me from the Party. Thanks to efforts of my wife’s father professor Miron Semenovich Vovsi [Miron Semenovich (Meir Solomonovich) Vovsi (1897-1960) was a Soviet therapist, Major-General of medical service. During the war he was the chief therapist of the army. Vovsi was arrested during the Doctors’ Plot, but discharged after the case was closed.], the punishment was changed into an easier one: I was transferred from a Party member to a candidate Party member. It meant that they permitted me to finish my studies. I graduated from the Academy with excellent grades (all fives), but they gave me a four for the diploma. You see if I got a five for the diploma, they would have been obliged to inscribe my name on the marble board in the Academy lobby, but it was impossible for a person just expelled from the communist party. I was appointed a teacher at the Engineering Academy. It was not good for a career of a naval officer. I worked there a year, and wrote my first book.

So I left for Tallinn. I served there 3 years. My family remained in Leningrad; therefore I lived in my cabin on board the ship. I served easily: in fact I had recently graduated from the Academy and wrote 2 books while working at the Krylov Academy. My scientific background was impressive. Those books were very useful to me during my service in Tallinn. Besides I was surrounded by people I got acquainted with during the war. The chief of the staff was my comrade (we studied at the same Academy). Rather quickly I gained authority and it became clear that I was the right man in the right place. You remember that I arrived to Tallinn being an associate party member. In a year I had to be promoted from associate to full membership. A year passed, but the chief of our political department said it was necessary to wait a year more. I quickly understood what the point was. At that time Beriya was arrested. My wife’s father Miron Vovsi remembered that it was Beriya himself who congratulated him on the occasion of his discharge and called him a free person after Stalin’s death. And I was unwary enough to tell someone about it. Therefore Beriya’s arrest cast an imputation on my character. That was the tragicomedy of my personal contact with Beriya. I was promoted from associate to full Party membership half-year later.

In 1956 I was suggested promotion in Kamchatka. But I decided to return to Leningrad and be engaged in scientific and pedagogical activities. I got good characteristics and returned to Krylov Academy to work at a scientific group. There I wrote a book about new vintages of ships and defended my kandidat nauk dissertation basing on it. [The kandidat nauk is a scientific degree in the USSR and in Russia; it is given to college graduates, who managed to pass through special examinations and defended their dissertation in public.] During presentation of my thesis everything was going fine, but suddenly the chief of our political department (those bodies always liked me very much!) asked me what I had been expelled from the Party for. I explained everything. He said it was clear to him and sat down. But unfortunately his question was a signal to start persecution. It manipulated the voting and the vote was negative. The Academy chief made a helpless gesture and said ‘I do not understand the members of our academic scientific council.’ In the meantime my book was published. It turned out comic: the dissertation was blocked, but the book was published. Moreover at that time many ships were constructed directly according to my book. The Academy chief invited me and said ‘It is time to finish, get ready for the second time.’ And I defended my thesis without a dissentient voice. All those events took a year. I do not regret: I worked very well.