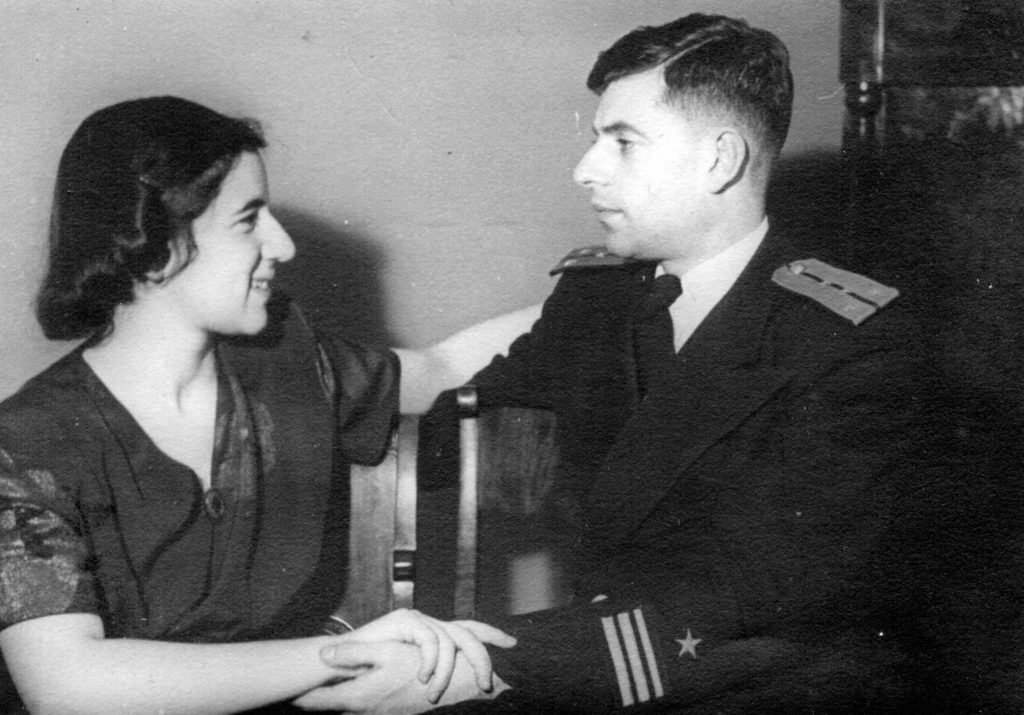 Anatoly Lifshits and his fiancée

This photograph shows me and my fiancee in one of the Moscow photo studios. It was taken in 1947. Here I’ll tell you about my marriage and our family life.

In 1947 I married Lubov Mironovna Vovsi. Lubov Mironovna was born in Moscow in 1925. She graduated from the Physics Faculty of the Moscow University and worked in Leningrad at the Television Institute.

After the capture of Berlin I was granted leave of absence. By that time my parents and my sister had moved to Moscow, and father got a job at glassworks near Moscow. That factory was very close to Moscow. On May 9, 1945 we went to Manezhnaya square joining the crowd of triumphant Muscovites. My sister invited her friend Lubov. My sister was very cheerful and she invented the following entertainment for me: she bought 13 theater tickets admitting self and friend each and invited one of her friends for each performance. Lubov Mironovna was one of those girls and it was our 2nd meeting. At first I was only polite and entertained the girls with cakes. It was rather difficult for me, because I did not know the names of those cakes. One of my dates asked me about an eclair, and I had no idea what it looked like.

In 1947 I entered the Naval Academy named after Voroshilov in Leningrad. It was not an easy task, because there was a large entry, but I managed. I was a very good cadet. Among other subjects they taught us bases of Marxism and Leninism (of course!). And I made the most terrible boner: discussing the works of communist scholars (Lenin, in particular) I called one of his books (I do not know why!) notorious. I meant nothing, but it appeared to be enough to expel me from the Party. Thanks to efforts of my wife’s father professor Miron Semenovich Vovsi [Miron Semenovich (Meir Solomonovich) Vovsi (1897-1960) was a Soviet therapist, Major-General of medical service. During the war he was the chief therapist of the army. Vovsi was arrested during the Doctors’ Plot, but discharged after the case was closed.], the punishment was changed into an easier one: I was transferred from a Party member to a candidate Party member. It meant that they permitted me to finish my studies. I graduated from the Academy with excellent grades (all fives), but they gave me a four for the diploma. You see if I got a five for the diploma, they would have been obliged to inscribe my name on the marble board in the Academy lobby, but it was impossible for a person just expelled from the communist party. I was appointed a teacher at the Engineering Academy. It was not good for a career of a naval officer. I worked there a year, and wrote my first book. But there came 1952.

In 1952 parents of my wife were arrested in connection with Doctors’ Plot. As for me, I was expelled from the Party once more, fired and transferred to the reserve. At that time my wife worked at the Leningrad Television Institute. She was fired, too. By that time we had got 2 children: my son born in my first wedlock (in 1941) and our mutual son (born in 1949). We sent our children to my parents and were waiting for arrest every minute. I started searching for work (we were out of money and sold books, things). At first I was naive enough to try to find work connected with my profession. I was well educated, people everywhere wanted to give me a job, but only until I named my wife. I was turned down at all special educational institutions, then at all schools. Later I simplified the problem: I wanted to work as (for example) a steersman on a small boat. And they said ‘How can we trust you to steer the boat if your father-in-law is the main murderer!’ They also did not permit me to study at trolleybus courses. I was offered to work as a tugboat captain, but only upon condition of my divorce. It was not good for me. I happened to meet my friend, a captain of torpedo boat. He had also been transferred to the reserve, but his reason was much more honorable: hard drinking. When we met, he held a post of the captain at the Leningrad fishing fleet. He promised to help me and took me to their director, whom I told everything openly. The director gave me the job of time-table clerk, but promised to fire me immediately in case somebody got to know about details of my biography. I also tried to find job for Lubov: I brought her texts for translation and she did it. But she never signed her translations.