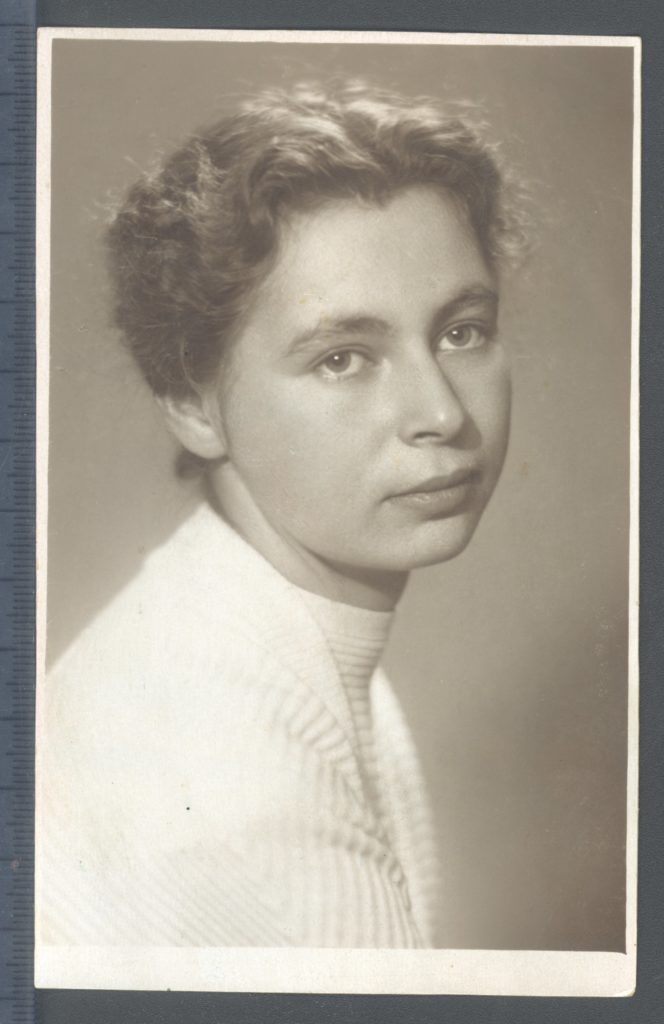 My father’s cousin Bronya was a good friend of daddy’s. After vocational school. she got a job in the radio committee. The mother of my future husband, Alexandra Kolton, worked there, too.

Alexandra and Bronya had once been very good friends, but for some reason had a quarrel and didn’t communicate for some time. In 1956 they resumed their friendship.

When Alexandra saw me at Bronya’s birthday party she liked me very much. She asked Bronya to invite me to the birthday party of her daughter Aida. I was seventeen-and-a-half years old. I said I was not going anywhere, let alone to unfamiliar people.

But Bronya did her best to persuade me! And Alexandra herself called me and said: ‘I ask you very much to come.’ I couldn’t refuse, and my brother and I set off to that birthday party.

All the family was absolutely unfamiliar to me, but I’d already heard a lot about them from Bronya. I remember how I entered and saw the very charming smile of my future husband Garry. That’s how we met.

Having completed my 2nd year, I left for Kiev for summer practice, and Bronya rented a summer house with Alexandra in Zelenogorsk [a resort near Leningrad]. When I came from practice, Bronya immediately told her that I had arrived.
Garry was there and didn’t show any visible interest in me. He wanted to meet me, but he didn’t know how to do it.

That time – 1956 – was a period when foreigners were allowed to visit Russia for the first time. There were many tourists coming to Leningrad and it became customary ‘to go and look at the foreigners.’

I lived near St Isaak’s Square and Hotel Astoria [in the center of Leningrad], and there were a lot of tourists walking around. Garry began to show interest in foreign tourists, and then Bronya gave him my telephone number.

Bronya didn’t believe that Garry really gave me a call until Garry described her what clothes I was wearing. We went for a walk in the center with him.

I married him when I was in my last year at the institute in 1959, and soon our son Leonid was born. I had a very difficult pregnancy, I suffered from a severe toxicosis – I had nausea, I couldn’t see or hear, simply couldn’t live.

We tried to have a second baby later and I was even in hospital for ‘preservation,’ but we ended up with only one son.