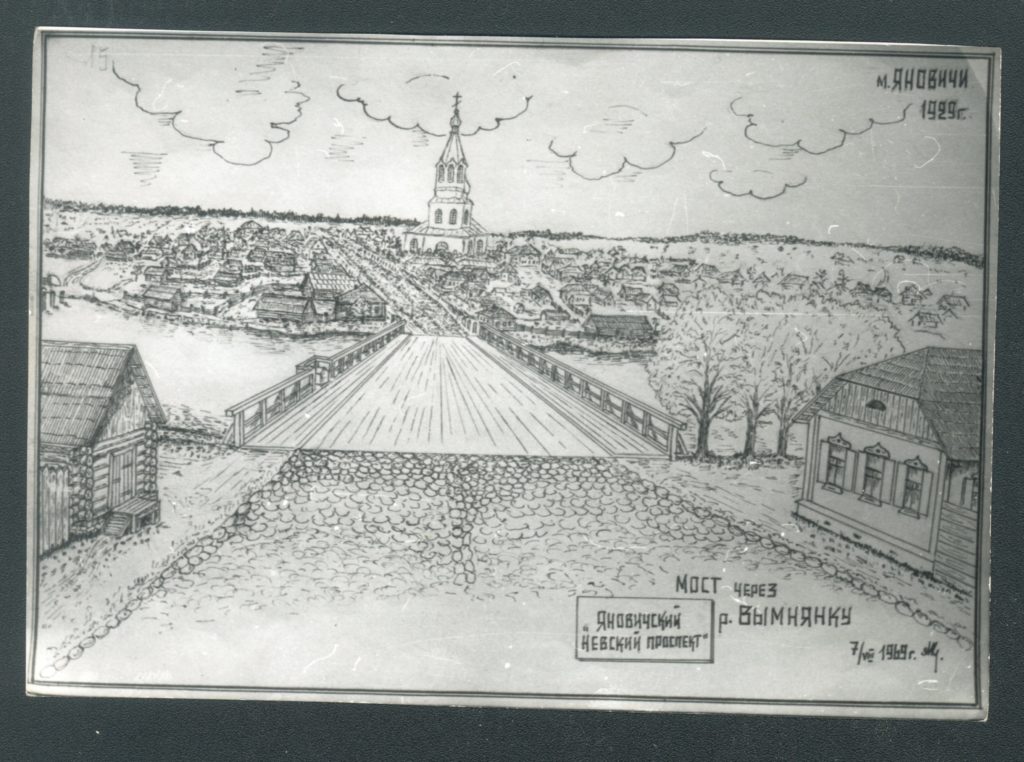 This is a bridge over Vymnyanka river in the Jewish borough Yanovichi. The drawing is from the year 1929.

The Yanovichi settlement where I was born was located 30 kilometers from Vitebsk. It was a very cultural place, since literate and intelligent Jews and Russians lived there. Before and after the Revolution all children, both Jewish and Russian, went to school together and I never heard the word ‘anti-Semitism’, because we all lived in friendship. Only the Kolonitsky family stood out. It was a Russian family of intellectuals and three people from this family were our teachers: two women and one man, Alexey Yakovlevich, thanks to whom we have the possibility to remember Yanovichi, looking at pictures made from his drawings. The Kolonitsky family had a big stone house with a huge fruit garden. They even had wonderful antonovka [type of apple] in winter, which they stored in the attic. Alexey Yakovlevich’s brothers and sisters worked a lot, they had a very big garden. They made everything with their own hands and never hired any assistants. After the Revolution their household was ravaged by the ‘Reds’ and communal sites were arranged on Kolonitsky’s former land. One by one the Kolonitsky left Yanovichi. These very intelligent and good people taught my sisters and brothers. Alexey Yakovlevich also taught me drawing, history, mathematics and physics. He lived the last years of his life in Moscow. My brother Aron also lived there and they kept in touch with each other. Alexey Yakovlevich gave all the pictures made from drawings, which he drew in Yanovichi, to my brother. My brother Aron died in 1977 and I inherited all these pictures.

A big wooden bridge led to the church across the Vymnyanka River. There was a street which led past the estate of the former Polish landowner, ex-owner of the Yanovichi borough, to Vitebsk. After the Revolution this manor served the Yanovichi population. A kindergarten was arranged in one of the buildings. I attended that kindergarten. Mostly craftsmen lived in that street behind the bridge. Every evening young people gathered on the bridge to spend their free time, especially on holidays and weekends. We had real fun.