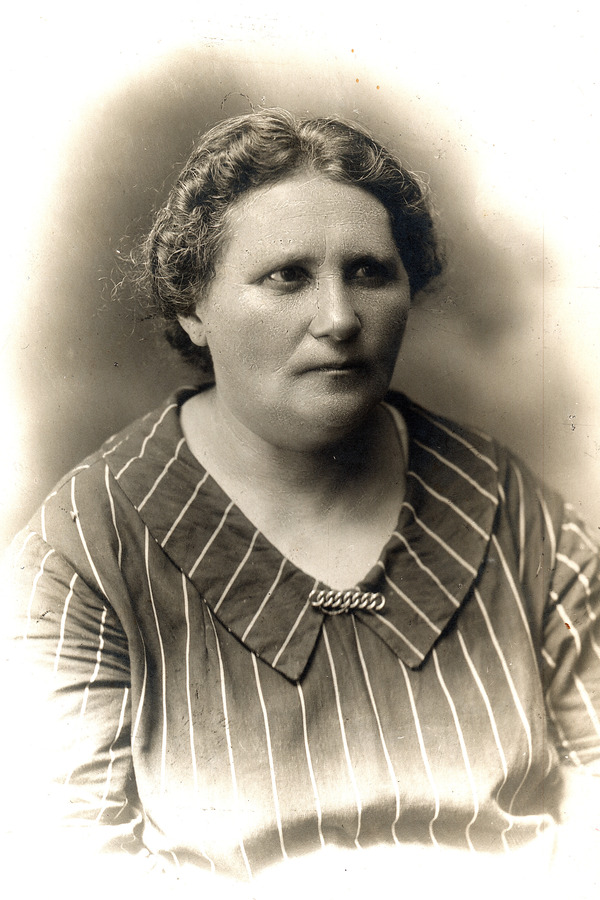 This photograph shows my grandmother in 1927. It happened in Minsk. At that time she was 53 years old. I remember her very well.

My maternal grandmother died in 1934, her name was Dina-Rayzle Hautovskaya. She was a housewife, she had got 10 children: 7 daughters and 3 sons. I remember my grandmother very well: she often went for a walk with me, we talked much.

I remember that one day I asked her ‘Granny, does God exist?’ Grandmother answered that she did not know, and asked me not to ask my grandfather about it. Grandmother did not wear either a wig or a scarf, but at home she observed kashrut and celebrated holidays.

My grandfather (my mother’s father) was called Elya Hautovsky, but all of us called him grandfather. He was born in 1870, and died in Minsk ghetto in 1941. He was a real devotee: he never ate out, because they observed kashrut nowhere around.

By the way, my parents did not observe kashrut. The only relative of ours, my aunt Sonya did it when she lived together with grandfather and grandmother.

After grandmother’s death she lived with grandfather and cooked kosher meals for him. Later she got married, but still observed kashrut.

Grandfather worked at a small shop, he was its owner. Financial position of the family was not very good. All children wanted to study, but it was impossible:

at that time (in tsarist days) there existed five percent quota for Jews. The elder children (my Mum, aunt Manya and aunt Sonya) finished high school in Minsk.

Two daughters of them (Maryasye and Malke), my aunts left for Moscow to study, later they got married there and had children. They both married Russians.

Aunt Maryasye was a teacher of geography. Aunt Malke worked as an economist at a textile factory all her life long. There she was a local Communist Party leader [a head of the primary organization of employees-communists of the organization].

Her husband’s surname was Sidorov. Before the war burst out, grandmother visited her daughters in Moscow. She reported that Malke had got a very good husband, although he was gentile. Both aunts survived the war in Moscow and reached a great age.

Grandfather observed Tradition, visited synagogue. He always wore a hat. I remember that when he prayed, he put tefillin on his forehead and hand. He also had tallit.

Their 6th daughter, aunt Polya got married and left for Kiev. There she continued studying at a pharmaceutical school and became a pharmacist.

In Minsk aunt Sonya decided to attend lectures at the pharmaceutical school instead of her absent sister, but they said ‘Hautovskaya, you steal our lessons.’ I heard that story later from relatives.

The rest children lived in Minsk. My mother’s brother, uncle David had a family, and uncles Misha and Shayle were not married. Aunt Polya lived in Kiev, she got a specialty of pharmacist, but did not work: she was a housewife (she had got 2 children).

After the end of the war I returned to Minsk (I worked there in the Executive Committee of the City Soviet of People’s Deputies) and sent them an invitation to Kazakhstan. [Official invitation for residence in Minsk after the lift of occupation in Minsk in July 1944, the city authorities established for the evacuated citizens as temporary restrictions.

These restrictions were caused by considerable destruction of available housing and municipal services and acute shortage of housing. For entry to Minsk, it was necessary to have an official invitation of a ministry, plant, establishment, or a member of the family residing in the city.] Therefore they managed to return to Minsk in 1945.

Grandfather and grandmother spoke Yiddish to each other, but they also could speak Russian. I misremember their house, because we lived separately.

We had a lot of cousins and we were good friends. Grandfather loved all of us very much, and we adored him. He often played games with us.